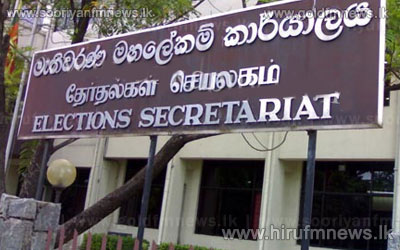 The Election Secretariat said that arrangements have been made for political parties to hand over nominations from today till 12 noon on August 01st.

Subsequently the Election Secretariat will announce the date of holding the election.

This time the election will be held according to the 2012 voters’ list.

However the Election Secretariat said that action had been taken to provide heavy security to district election secretariats during the period of receiving nominations.

The election secretariat said that since an election was going to be held in the North after about 25 years, a special security programme would be implemented in the Mullaitiv, Mannar, Kilinochchi, Jaffna and Vavuniya district secretariats.

The Election Secretariat told our news team instructions had been given to security forces to take action to prevent going on procession on the date of the end of ending handing over nominations.

However Election Commissioner Mahinda Deshapriya said that that adhering to proper procedure was compulsory in handing over nominations for the upcoming election.