Appeals Court issues notices for Ranil and Thissa; Injunction from the district court 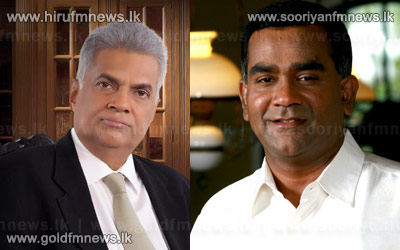 The Court of Appeal today issued notice on the respondents following a petition filed by UNP Provincial Councilors Shiral Lakthilake and Maithree Gunarathne.

When the petition was taken for hearing today, President of the Court of Appeal Justice Sri Skandarajah ordered the respondents to appear in court on the 16th of September.

Opposition Leader Ranil Wickremesinghe, UNP General Secretary Tissa Attanayake and 94 members of the UNP Working Committee and the party Disciplinary Inquiry Committee have been named as respondents in the petition.

The two UNP PC members in their writ application have challenged the UNP Working Committee’s move to expel them from the party.

MP Abdul Cader has been called before the UNP Disciplinary Inquiry Committee today for his voting with the government for a recent impeachment in parliament.

Abdul Cader is a UNP parliamentarian who crossed over to the government.

It was revealed that UNP General Secretary Tissa Attanayake had sent a fax message to Deputy Minister Cader calling him for a disciplinary inquiry today.

It was also announced in the Court that the disciplinary inquiry would be held whether Deputy Minister Cader was present before the Disciplinary Committee or not.

Appearing on behalf of Deputy Minister Cader, President Counsel Faizer Mustafa asked the Court to issue an injunction as it was impractical to fix a disciplinary inquiry on the same day parliament adjourns.

Later Colombo Chief Magistrate Pradeep Hettiarachchi issued an injunction today on the respondents which is valid until the 8th of August.