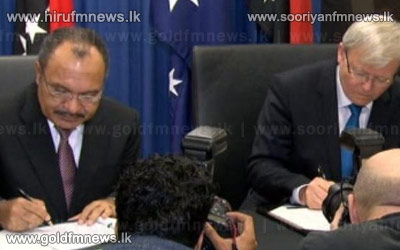 Australia's conservative opposition unveiled plans for a military-led response to repel boatpeople, branding the problem a "national emergency" after the government declared a radical new policy aimed at crippling people-smuggling.

With tens of thousands of asylum-seekers risking their lives on leaky boats to reach Australia, the Tony Abbott-led opposition said they would put a senior military commander in charge of a joint agency taskforce to deal with the problem if it comes to power.

More than 15,000 boatpeople have arrived so far in 2013, with the influx becoming a major policy issue ahead of national elections due by the end of November, with opinion polls suggesting Abbott will beat Labor's Kevin Rudd and assume office.