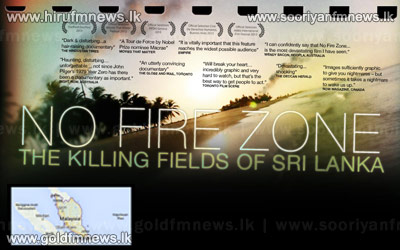 The controversial documentary ‘No Fire Zone’ which alleges that war crimes were committed by the Sri Lankan armed forces was screened in Malaysia last week.

In addition the Malaysian authorities also detained the director of the documentary Callum Macrae.

This time however the screening organized by LFL at the Selangor Chinese Assembly Hall went on smoothly without any disruption from the Home Ministry officials.

After the screening, Macrae joined the audience for a 10 minute question and answer session via Skype.

During the Q & A session Macrae stated that he is not a fan of LTTE, but that the war crimes committed against the ethnic Tamils was atrocious.

Former senator S Ramakrishnan who was instrumental in organizing the screening and civil societies in the country want the Malaysian government to refer Sri Lanka to the war crimes tribunal for atrocities against Tamils in the final days of its decades long civil war.

It is also reported that the DAP leader has suggested that Prime Minister Najib Tun Razak denounce economic ties with Sri Lankan government and refrain from attending the Commonwealth Heads of Government Meeting meeting in Sri Lanka later this year.