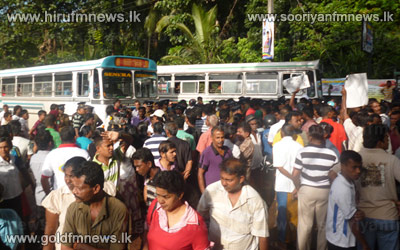 Residents of Rathupaswala in Weliweriya have gathered at the Rathupaswala Public grounds alleging that authorities had failed on their promise made yesterday.

They staged a protest yesterday blocking the new Kandy road stating that waste of a nearby factory had contaminated drinking water.

Police who arrived at the scene stated that a solution will be provided to their issues today via the relevant officials.

Chairman of the Central Environmental Authority Wimal Roobasinghe yesterday said that a group of officials will be sent to look in to the matter today.

Although residents were present at the ground at 10AM, the officials had not arrived.

Residents who had gathered expressed these views.

Meanwhile, DIG in charge of Western Province – North L G Kularathna who had arrived at the scene has requested the public to respect law and order and failing which the Police would have to enact the law.