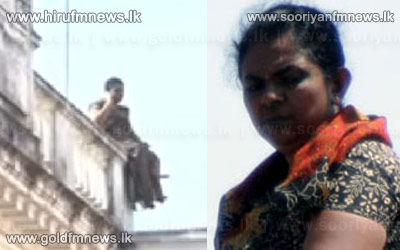 Addressing a meeting held at the Homagama Divisional Secretariat, Education Minister Bandula Gunawardana said today that the protest staged by a female teacher of the Royal College was a bad example for the State service.

Our correspondent said that the protest which was staged by the lady teacher of the Royal College against the transfer of 3 teachers including herself is still be continuing.

The lady teacher started the protest on the roof top of a school building this morning.

However Lanka Teachers Association General Secretary Joseph Starlin said the main reason for this type of protest is the failure to implement the Teacher Transfer Policy.

When our news team contacted Royal College Principal Upali Gunasekera, he had this to say.

Meanwhile Minister Bandula Gunawardana criticized the teacher’s act during a speech he made in Homagama.