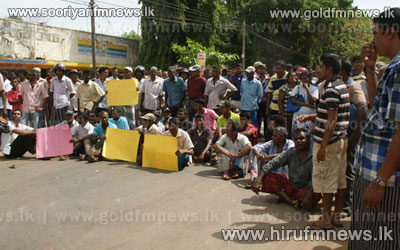 The fast unto death began yesterday by the Chief incumbent of the Sambuddha Jayanthi Viharaya at Ratupaswala in Weliweriya is still continuing.

Chief Incumbent, Teri pehe Siri Damma Thera began the fast yesterday night demanding a solution to the water contamination in the area which affected residents of 10 villages in the area after a factory released toxic chemicals to the environment.

Meanwhile Minister Mervyn Silva who visited the areas has ordered the factory owners to close their factory.

This is the conversation taken place between the minister and the residents.

The affected people demanded the authorities to provided them drinking water free of charge.