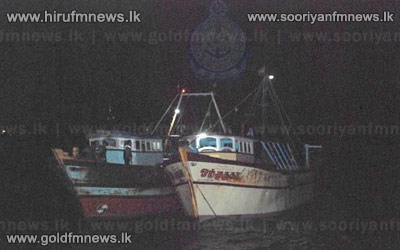 65 Indian fishermen in nine trawlers have been detained by the Sri Lankan Navy last night for allegedly violating the international maritime border.

Naval spokesman Commander Kosala Warnakulasuriya has said that 34 of them in five trawlers were arrested off the coast north of Point Pedro in the north, yesterday.

While another 31 were arrested east of Mullaithivu along with four vessels.

He said the arrest came last night and the fishermen have been handed over to the authorities in Point Pedro.

Meanwhile the tour of the 19 member Indian fishermen delegation to Sri Lanka to discuss the dispute over the fishing in Sri Lanka-India sea boundary has been postponed.

Adviser to the Fisheries Department S.P. Anthonimuttu told our news team that he was informed by the adviser to the Tamil Nadu Fishermen Federation yesterday about the cancellation of the trip tomorrow.