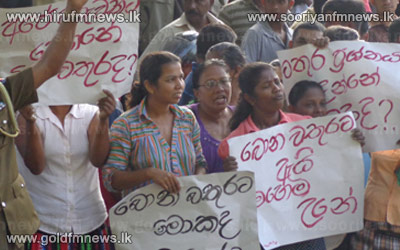 The Gampaha Magistrate considered the reports submitted by the police on the controversial factory at Nedungamuwa in Weliweriya yesterday and informed that it cannot issue an order to close the factory.

Gampaha Magistrate Heshantha de Mel stated this after considering the “B” report produced by the police on the prevailing situation of the area.

Under the Clause 124 of the Penal Code, Gampaha SP Ranjith Masinghe submitted the report to the Court yesterday and requested the Court assistance in the investigations which are ascertaining whether the operation of this factory is the root cause to the contamination of the ground water resources.

4 pubic petitions in connection with the same issue were also submitted to the Courts yesterday.

The Magistrate stated that the content of the 4 petitions were not sufficient to issue an order to close the factory with immediate effect.

The magistrate also permitted the police to allow 5 parties to submit reports after testing the root causes to the contamination of the ground water sources in the area.

Meanwhile the Water Supply and Drainage Board stated that 4 mobile units will be dispatched to the area concerned to check the PH levels of water.

Head of Laboratory services H A K Amarakoon elaborating further had this to say….