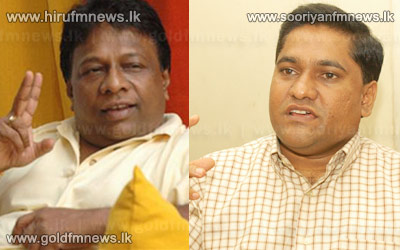 The JVP today invited Minister Dallas Alahapperuma for an open debate after JVP Parliamentarian Vijitha Herath engaged in an inspection tour of the Weliweriya and Rathupaswala areas today.

Residents of 10 villages staged protests stating that their drinking water has been contaminated due to waste of an factory in Nedungamuwa.

The Army intervened in dispersing the protesters who had gathered in Weliweriya blocking the main road last Thursday.

However, speaking at a media briefing that was held yesterday Minister Dallas Alahaperuma expressed these views.

This was the response from JVP Propaganda Secretary Parliamentarian Vijitha Herath.

Meanwhile, a delegation from the Catholic Bishops Council also engaged in a tour of Rathupaswala today.

The team led by Assistant Bishop Maxwell Silva also spoke with residents gathered at the St Anthony’s Church in Weliweriya.

Father Lakpriya Nonis stated that the Cardinal had requested authorities to conduct a proper investigation in to the incident.

Chief Incumbent of the Galoluwa Sri Sambodhi Vihara Venerable Theripaha Siridhamma Thero states that if a proper solution is not found for the Weliweriya – Rathupaswala drinking water crisis, the thero will enter into another fast unto death.

However, Security Forces say that normalcy has returned to the area.

The OIC of Weliweriya who was also receiving treatment has been transferred to the Police hospital.

The Police and Army are conducting separate investigations in to the incident which took place in Weliweriya.

Newly appointed Army Commander Lieutenant General Daya Ratnayaka who paid a courtesy call on the Chief Prelates of the Asgiri and Malwathu chapters expressed these views regarding the investigations.