Although ports are built around the country criticism cannot be stopped; says President. 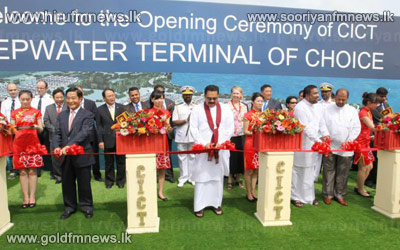 President Mahinda Rajapaksa said that certain parties are jealous of the massive development schemes being carried out by this government.

After declared open the 1st Phase and the breakwater of the South Colombo Port this morning President Rajapaksa said that his government restarted the development that had been hindered in the past.

Speaking further The President had this say…….

The massive new South Port of Colombo, located mid-way on the lucrative east-west sea route has world class facilities and with its 18-metre draft, can handle even the biggest Triple-E Class vessels carrying 18 thousand containers that are already in service.