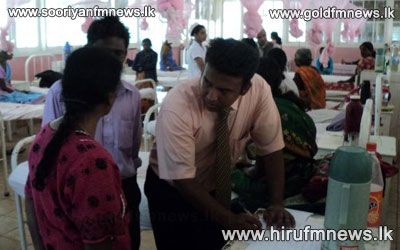 Two house maids hailing from the Matale region who returned to Sri Lanka after suffering torture in the Middle East are currently receiving treatment in ward 16 of the Matale hospital.

She went to Dubai in 2007 for employment and had returned to Sri Lanka approximately a week ago after suffering harassment and abuse at her work place.

Following her arrival in Sri Lanka she had admitted herself to the Matale hospital for treatment to injuries she had suffered during her employment.

She spoke to our news team and expressed the following views while receiving treatment in hospital.

The other woman receiving treatment in the Matale hospital is Wasanthi Piyathissa who hails from the Mandawala – ulpatha region in Matale.

She too had returned to the island approximately a week ago after suffering abuse and torture in the hands of her employers and had admitted herself to the Matale hospital for treatment.

Her husband spoke to our news team regarding her condition and expressed the following views.

They alleged that despite complaints to the Foreign Employment Bureau they had not received any response.

Our news team inquired from the Deputy General Manager of the Foreign Employment Bureau Mangala Randeniya regarding these allegations.

In response he stated that the Foreign Employment Bureau is bound to take immediate action regarding Sri Lankan domestic workers who suffer abuse in the hands of their employers.