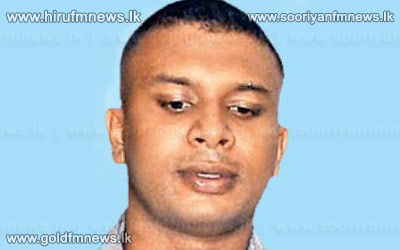 The Police Media Spokesman Office said that Ravindu Gunawardana is the main suspect in connection with the abduction and murder of businessman Mohammad Siyam.

The Police Media Spokesman Office added that the Kaduwela Magistrate Court has also issued a warrant on Ravindu Gunawardana.

The CID informed the Colombo Magistrate Court recently that it would take rapid action to arrest Ravindu Gunawardana.

Kaduwela Magistrate Wasantha Jinadasa issued arrest warrant on Ravindu Gunawardana on July 11 as he failed to appear in Court for a case in connection with an alleged abduction and assault of a private university student in Malabe.

The son of Vass Gunawardana and his wife were accused of this incident which took place on the 9th of August 2009.

Earlier the CID informed the Court that Ravindu was planning to flee the country, and having taken the information into consideration, the Court banned Ravindu leaving the country.

7 suspects including former DIG Vass Gunawardana are in remand in connection with the conspiracy to abduct and kill businessman of Bambalapitiya Mohammad Siyam.