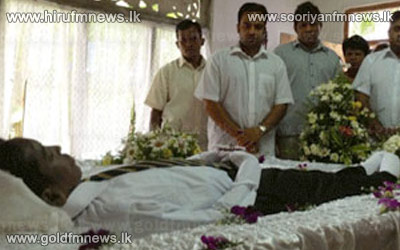 The funeral of student Ravishan Perera who injured during the Weliweriya incident and died later was held at the Weliweriya Roman Catholic Public Cemetery today.

19-year-old Ravishan was expecting to sit the GCE Advanced Level examination that started on Monday.

Ravishan who received injuries during the Weliweriya protest on August 1st was admitted to Wathupitiwala hospital and later transferred to the ICU of Colombo National Hospital for further treatment.

Our correspondent covering Ravishan’s funeral said that a large number of residents in the area gathered at the Cemetery to pay last respects to late Ravishan.

3 youths including 2 school students died at the Weliweriya protest incident and the funeral of the 3rd victim, 29-year-old Nilantha Pushpakumara will be held tomorrow.

Meanwhile the Magistrate inquiry on the Weliweriya incident is scheduled to be held at the Gampaha Magistrate Court tomorrow.