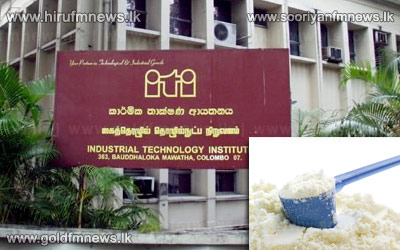 The Court of Appeal issued an interim injunction on Fontera Company Limited today preventing the company of publicizing advertisements which try to convince consumer that their products are 100% suitable for human consumption until the 21st of this month.

The order was issued after considering a fundamental rights petition filed by Kamal Samarasinghe of Matale.

However Fontera Company states its products are tested at internationally recognized laboratories, and they were not able to find any signs of Dicyandiamide tainted in its products.

The Health Ministry released a communiqué quoting a report issued by Institute of Technical and Industries saying that some Fontera products are tainted with Dicyandiamide or DCD.

The Ministry also stated that it has already informed these milk companies to withdraw the contaminated products from the local market.

When our news team contacted the Maliban Milk Product Company, its Production Manager Teja Gunawardana said that it cannot come to a conclusion just on the findings of the Institute of Technical and Industries.

Fonterra had also organized a press conference to express its views regarding this today.

Speaking at the press conference, the deputy director of Fonterra’s Scientific Regulation Activities Prof. Sanath Mahawithanage stated that the report issued by the ITI should be further analyzed.

However he also stated that according to the decision made by the ministry of health steps were taken to remove two batches of Fonterra products from the market.

Meanwhile the Industrial Technology Institute issuing a statement today stated that the ITI posses all the necessary technological facilities and specialist knowledge to conduct tests regarding the chemical Dicyandiamide which is more commonly known as DCD.

The statement also stated that the ITI will guarantee the quality and the accuracy of the reports regarding the tests.

Speaking at a press conference held in Colombo today, Minister of Health Maithreepala Sirisena stated that an international test was also performed to  the verify the findings of tests performed locally and that steps have been taken according to the results of those tests.

Meanwhile, our news team inquired from the chairman of the Government Medical Officers Association Dr. Anuruddha Padeniya regarding what DCD is and its effects on the human body.