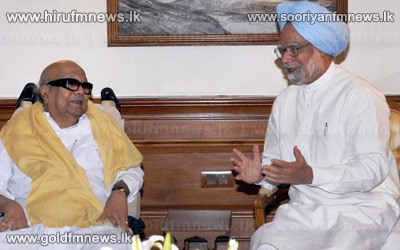 Raising the pitch on the Lankan Tamils issue and attacks on Tamil Nadu fishermen, DMK chief M Karunanidhi-led Tamil Eelam Supporters Organisation yesterday staged protests across Tamil Nadu demanding that the Centre to boycott the Commonwealth meeting slated to be held in Colombo this November.

Criticising the Centre for being 'silent' , the DMK chief, whose party pulled out of the UPA in March last on the Lankan Tamils issue, said it should not dismiss the protests as 'mere gatherings' in various places and "those in power should know that there is a limit to patience."

Karunanidhi said that the Centre should not take this lightly as mere gatherings in Chennai, Tiruchirapalli, Madurai, Thanjavur, Nagapattinam, Tirunelveli, Coimbatore and Salem.

The organisation, revived by Karunanidhi last year, had resolved to press the Centre to boycott the Commonwealth Head of Governments Meeting in view of the alleged crimes in Sri Lanka in 2009.

It had also called for action from the Centre to take steps to protect Indian fishermen from "being attacked by the Lankan armed forces.