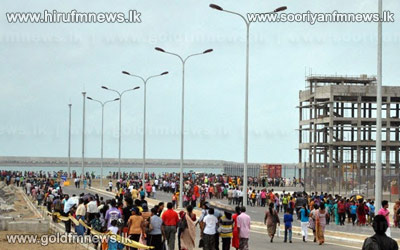 Over 5 million visitors have arrived to see the new South Port as of this evening since it was opened to the public on the 8th of August.

People were also allowed to use their own mode of transportation or the shuttle service provided free of charge by SLPA.

Despite the shuttle bus services provided by the Sri Lanka Ports Authority, due to the huge interest expressed by the public and the large numbers arriving from all parts of the country, people were also allowed to walk into the site and along the breakwater providing a firsthand experience of witnessing one of the world’s major deep draft container ports.

The massive terminal in Colombo is located mid-way on the lucrative east-west sea route and has facilities on par with Singapore and Dubai.

On public demand view of the Colombo south harbour have been extended until Thursday.