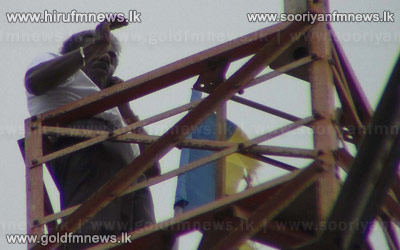 An individual had engaged in a protest this morning after climbing on top of the main engineering pylon of the Chilaw Electricity board.

According to our regional correspondent, this individual who happens to be a handloom manufacturer had engaged in this protest demanding support to continue his livelihood.

He stated that despite requesting support from the authorities on several occasions, it had been to no avail.

The individual who engaged in the protest manufactures creations which utilize unusable coconuts.

The deputy minister of external affairs who arrived on scene during the protest had made a promise to the protestor to look into his grievances expediently.

Our regional correspondent reported that accordingly the protestor had climbed down from the pylon a short while ago.