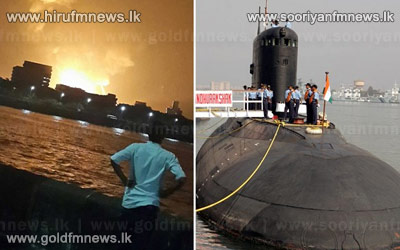 At least 18 sailors are feared to be trapped on board an Indian submarine that caught fire after an explosion in a Mumbai dockyard.

The blast occurred shortly after midnight and it took fire-fighters several hours to douse the blaze. Rescue teams are on scene.

It is unclear what caused the explosion on the INS Sindhu-rak-shak but dramatic images on Indian television appear to show a large fireball illuminating the sky. Smoke from the blaze could be seen in many parts of the city.

A naval inquiry has been set up to look into the causes of the incident.