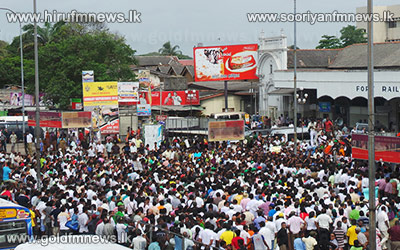 The Police say that they are prepared to present facts before courts regarding the violation of the court order issued on the “Wipakshaye Virodhaya” led by the United National Party.

The Police media spokesperson SP Buddhika Siriwardana stated that the relevant information is being compiled at present.

He also stated that the facts will be presented to courts by the respective Police stations.

The United National Party led Wipakshaye Virodhaya staged a demonstration before the Fort Railway station against the Weliweriya incident.

Accordingly any actions causing inconvenience to the general public or leading to traffic congestion was prohibited.

This order had been brought to the notice of 9 Party leaders of the Wipakshaye Virodhaya but the protesters had proceeded towards the Presidential secretariat via the Lotus Round about.

The Police had blocked the protesters but few of them were permitted to proceed towards the Presidential secretariat where they handed over an epistle.