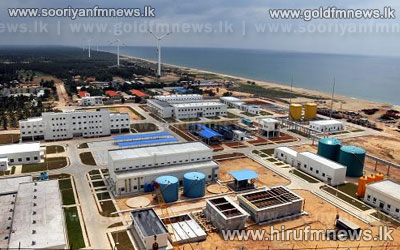 The National Electricity Consumer Movement states that if the Norochcholei power plant which is already currently inactive is shut down for annual maintenance the Ceylon Electricity Board will suffer a loss of 80 million rupees per day.

The CEB is preparing to shut down the power plant at the end of this month to carry out maintenance repairs two years after it was built.

Accordingly the power plant will be shut down for approximately 40 days and the CEB will be forced to obtain power from private power plants in order to fill the energy shortfall due to Norochcholei being shut down.

As a result of the heavy rains experienced in the central hills recently the water levels of the reservoirs used to generate hydro power was at a high level.

Due to this the CEB managed to save the expenditure of operating thermal power plants.

However, the chairman of the Lanka Electricity Engineers Association Nandika Pathirage stated that if the Norochcholei coal power plant is closed for maintenance there is a risk of the losses suffered by the CEB further increasing.

However, the National Electricity Consumer Movement is stating that the decision taken by the CEB to shut down the Norochcholei coal power plant is a sudden one and the chairman of the movement Bandula Chandrasekara had the following to say in this regard.

However the ministry of power and energy stated that this decision was taken a while ago.

The secretary of the ministry M. M. C. Ferdinandu had the following to say in this regard.

The chairman of the National Electricity Consumer Movement Bandula Chandrasekara stated that a special inquiry needs to be carried out as to why the Norochcholei power plant inactive from time to time.