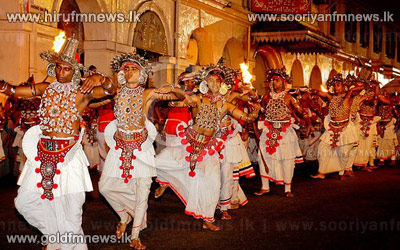 The first Randoli Perehera of the Kandy Asala Perehera will begin parading streets at the auspicious time of 8.06 tonight.

A large number of spectators have already gathered to Kandy and Diyawadana Nilame Pradeep Nilanga Dela Bandara urged the visitors to behave themselves and observe the pageant.

The preliminary pereheras begin inside the 4 major devala compounds just after performing “Cup” rituals at them, and inside perehera will continue for 5 days.

On the 6th day, Kumbal Perehera begins to parade the city streets for another 5 days before the main Randoli Perehera.

Meanwhile the traditional offering of bee honey to the Sacred Temple of the Tooth Relic by the indigenous community was conducted with the patronage of the Indigenous Chieftain Uru Varige Vannile Atto this morning.

After the bee honey pooja, Uru Varige Vannile Atto expressed his views to the media.