Nursing officer in Kandy still atop the tree 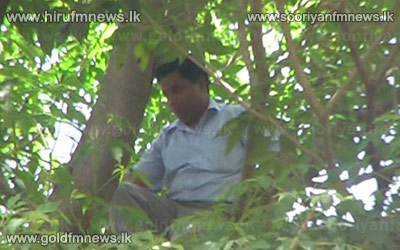 The protest started by a nursing officer atop a tree in the Kandy General Hospital grounds is still on going.

Nawarathna Bandara, the nursing officer in question, is engaging in the protest demanding that the authorities withdraw the decision taken with regard to the issue between the doctors and the nurses of the hospital regarding a restroom.

Speaking to our news team another nursing officer had the following to say with regard to his colleague’s protest.

One of the main demands of the doctors who engaged in trade union actions was that the hospital authorities transfer a female nurse who serves in the hospital surgery room who acted in an undisciplined manner to a different division.

However, the nursing officer atop the tree states that he is engaging in the protest against the decision taken to transfer the nurse in question to another division in the hospital.

The deputy director general of medical services of the Ministry of Health Ananda Gunasekara arrived this afternoon at the location where this nursing officer is engaging in the protest.