An assurance from Minister G L to the Indian Premier that a value will be given to the Indo - Lanka agreement. 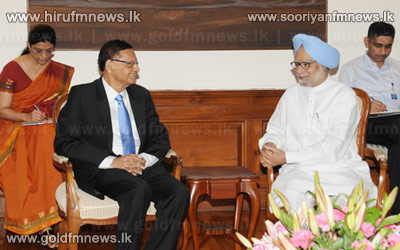 The discussions between Prime Minister Manmohan Singh and Proffesor G.L. Peiris included a range of matters, such as, cooperation with regard to the economy, development and the rehabilitation process.

The Minister described the arrangements that are being made for the Commonwealth Heads of Government Meeting as well as the Business Forum in which there has been considerable interest by the Confederation of Indian Industry and the Federation of Indian Chambers of Commerce and Industry.

Minister Peiris informed Prime Minister Singh of recent developments in Sri Lanka including arrangements that are being made for the elections to the Northern Provincial Council on 21st September.

Describing the process involving the Parliamentary Select Committee and the 13th Amendment to the Constitution, Minister Peiris said Sri Lanka is in compliance with its obligations in terms of the Indo - Lanka Accord which includes specific provisions on linguistic and cultural aspects.