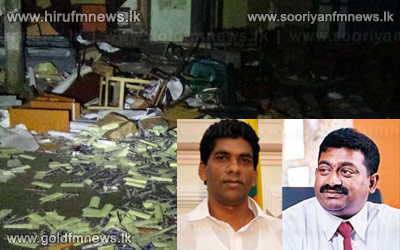 Eight vehicles were damaged due to a clash that took place between two political groups in the Nuwara Eliya – Hatton – Dimbula-pathana commercial area.

The police said that this clash had taken place last afternoon between two groups of supporters of the Ceylon Workers’ Congress and National Estate Workers’ Union.

The Hatton police said that complaints had been lodged by both groups.

It was reported that even after this clash, last night, a certain group had also attacked an office belonging to MP P. Digambaram’s National Estate Workers’ Union.

Speaking about the clash, National Estate Workers’ Union MP P. Digambaram charges that the attack is carried out by the CWC.

However our news team inquired about the clash from CWC leader Aarumugam Thondaman too.