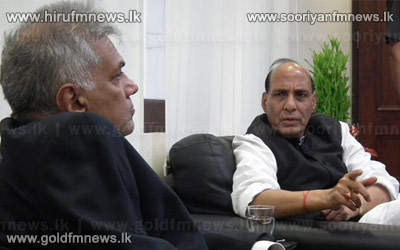 Opposition leader Ranil Wickramasinghe who is currently engaging in a tour of India met with the chairman of the Barathiya Janatha Party Rajanath Singh.

A speaker of the United National Party stated that the focus of the discussion was on the Indo – Sri Lanka fishing crisis.

The opposition leader had stated how he had used bilateral ties with the then Indian Premier Athal Bihar Vajpai to adopt steps to solve the issue.

The two parties had also exchanged ideas regarding the upcoming general election in India and the provincial council elections in Sri Lanka.

During the discussion the two leaders also exchanged views regarding the 13th amendment and its political ramifications.

Highlighting the importance of strengthening the ties with neighboring countries even more, Rajanath Singh also had stated the importance regarding developing ties at party level between the UNP and the BJP.