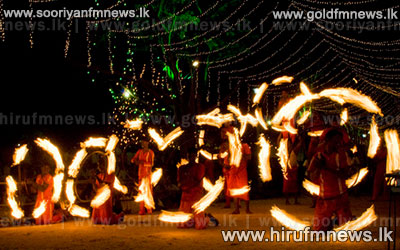 The Kandy Esala Perahera will conclude the next day with the water cutting ceremony and day perahera.

Large crowds are expected in Kandy to view the final Randoli Perahera.

Princess Tsuguko of Takamado of the Japanese Royal Family and Princess Maha Chakri Sirindhorn of Thailand will also attend the final Randoli Perahera of the Esala Maha Perahera today.

Meanwhile The final Perahera of the Ruhunu Kataragama Maha Devalaya will be held today at the auspicious time of 7.45.

The fire walking at the Kataragama Maha Devalaya premises and the 12th Perahera were held on August 18th.

According to the Basnayaka Nilame about 50 thousand devotees arrived on Pada-Yathra at Kataragama Sylvan Shrine from the North and East.

The first perahera was held on August 7th.

The Esala festival will come to an end with the water cutting ceremony at Menik ganga tomorrow.