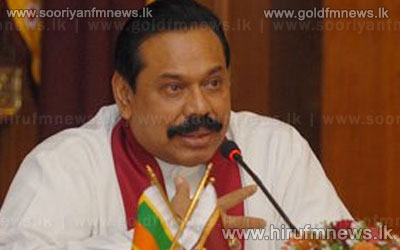 President Mahinda Rajapakse states that no one should make any statements that bring disrepute to the country in order to obtain narrow political gains.

President Rajapakse also stated that there is freedom to state anything in public.

The president made these statements while speaking at a public gathering held at the residence of Prime Minister D. M. Jayarathne.

During his speech President Rajapakse reiterated that it is the responsibility of all to safeguard the country from attempts by bankrupt politicians and non governmental organizations that are spreading rumors all around the world.

Meanwhile member of the French Senate Nathalie Boulet states that she is ready to state the reality of Sri Lanka to the entire world.

Speaking to President Mahinda Rajapakse at the presidential house in Kandy Senator Boulet stated that certain countries and groups are spreading rumors without knowing the truth at ground level and that Sri Lanka should tell its saga to the world.

Senator Boulet is part of the group that is in Sri Lanka to prepare the background for the arrival of delegates who will be taking part in the Commonwealth Business Forum concurrently being held with the CHOGM summit in November.