It is revealed that the bullet brought to the Parliament chamber was a pen cap. 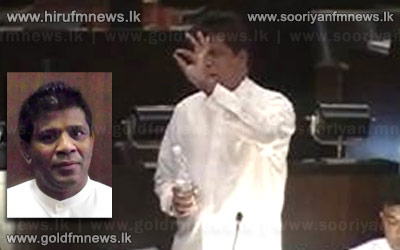 Deputy Speaker Chandima Weerakkody says that it has been discovered that what UNP MP Ajith Maannapperuma had brought to parliament chamber yesterday as a bullet was a plastic pen cap.

An adjournment motion with regard to the Waeliweriya incident was taken up for debate in parliament yesterday.

On this occasion UNP MP Ajith Maannapperuma participating in the debate expressed his views showing also what he considered to be a bullet.

At this stage a tense situation cropped in parliament with Minister Mahinda Amaraweera and MP A. H. M. Azvar objecting to it.

Subsequently MP Shriyaani Wijewickrema who was at chair said that an investigation would be held with regard to it.

On this occasion the Deputy Speaker said that what MP Ajith Maannapperuma had shown was not a bullet but a plastic pen cap.

Speaking to our news team further about the subject the Deputy Speaker said that proper action would be taken in the future with regard to MP Ajith Maannapperuma.