The pow vow between President and Belarus President today. 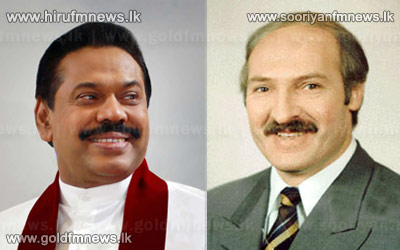 On his arrival the President was warmly received according to the Belarus traditions at the Minsk National Airport by the Belarus Minister of Foreign Affairs.

President Rajapaksas visit to Belarus is the first by a Sri Lankan head of state to the former Soviet Union country, which became independent in 1991.

President Rajapaksa will hold bilateral talks with his counterpart, the President of Belarus Alexander Lukashenko, and Prime Minister Mikhail Myasnikovich during today.

The Belarus-Sri Lanka Business Forum will take place to coincide with the visit of President Rajapaksa who will be accompanied by a delegation of businessmen to attend the Forum where the President will be making a speech along with Prime Minister Myasnikovich.