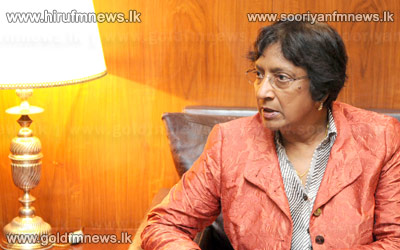 A group of another four representatives and the High Commissioner arrived in the island last afternoon on a seven-day official visit.

UNHRc High Commissioner Navaneethan pillai expressing her views to media in the meantime stated as follows:

She is scheduled to meet with the Chief Justice and Minister of National Language and social integration today..

However our news team also inquired from former diplomat Dr. Dayaan Jayatilleke about the possible impact of the UNHRC High Commissioner’s visit on Lanka.

Meanwhile the Raawanaa Force says that that it will stage an agitation in front of the Colombo UNHR office today.

Raawanaa Force convener Venerable Ittaeaekandey Saddhaatissa Thero said that this protest had been organized to protest against the UNHRc High Commissioner who has arrived in the island to hold inspection with regard to human rights.

However the Patriotic National Movement requests the Government not to allow any NGO to hold discussion with UNHR High Commissioner Navaneethan pillai.

Patriotic National Movement general secretary  Dr. Vasantha Bandaara told our news team that although political party representatives were answerable to the people with regard to the discussion held with the High Commissioner, representatives of other organizations were bereft of such responsibility.