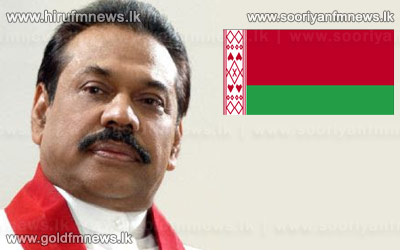 President Mahinda Rajapaksa says that institutions like the UNHR Council inconveniences countries like Sri Lanka and Belarus based on requirements of different sectors.

President’s Media Unit said that President said so during a discussion between the President and Belarus President Alexander Lukashenko held yesterday.

On this occasion President Mahinda Rajapaksa said that he condemned the use of the UNHR Council for imposing pressure on other countries.

Agreeing to enhance cooperation in a number of sectors, including economic, trade, investment, education and technology Sri Lanka and Belarus signed seven agreements and memorandums of understanding.

The agreements were signed following the bilateral discussions between President Mahinda Rajapaksa and Belarus President Alexander Lukashenko at the official residence of President Lukashenko.

During this discussion, President Rajapaksa thanked President Lukashenko for understanding and being aware of the real situation in Sri Lanka.

President Rajapaksa briefed President Lukashenko of the arrangements being undertaken in preparation of the Commonwealth Heads of Government Meeting 2013 in November and requested Belarus to send a business delegation to the Commonwealth Business Forum that will take place on the sidelines of CHOGM.

Before conclusion of the bilateral discussion, President Rajapaksa extended an invitation to President Lukashenko to visit Sri Lanka, which he accepted.