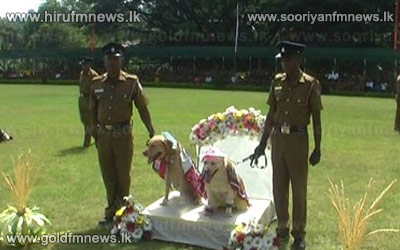 The Police Headquarters has issued an explanation regarding the marrying of several pairs of canines belonging to the Kandy Asgiriya Police Kennels on a poruwa.

In the statement the police headquarters expressed its regret regarding any harm the activities of the inauguration ceremony of Police Canine Breeding Program may have caused to any cultural heritage or if it caused any person any discomfort.

As part of the Police Canine Breeding Program several pairs of canines were married after they were placed on a poruwa.

Several organizations including the Sihala Ravaya organization stated that certain items in the ceremony were not suitable for the culture of the country.

Subsequently Minister of Cultural Affairs T. B. Ekanayaka had requested from the Inspector General of Police to conduct an inquiry regarding this.

Speaking further the minister stated that he condemns the fact that such cultural practices were used with regard to canines.

Minister Ekanayaka expressed the following views in this regard.