2 protests along the route taken by Navi Pillai. 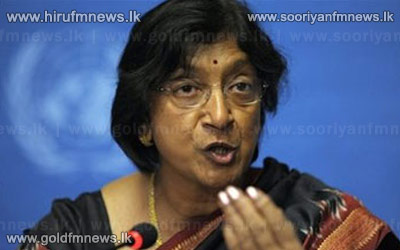 The UN Human Rights Commissioner Navi Pillay states that she is in Sri Lanka to only inquire regarding human rights.

The UN Human Rights Commissioner who is in the island for a 7 day official tour engaged in a tour of the Northern Province today.

When Navi Pillay arrived at the Governors officer a protest was held in front of the office which was organized by the Missing Person’s Parents Collective Association.

During the protest the association alleged that their relatives were abducted by the LTTE during the war.

The secretary of the association K. D. Chandrasoma expressed the following views in this regard.

After concluding the meeting with the Governor of the Northern Province the UN Human Rights Commissioner Navi Pillay took part in a meeting held in the Jaffna Public Library.

When the commissioner arrived at the library another protest took place and a protestor expressed the following views.

Subsequently the UN Human Rights Commissioner Navi Pillay visited the UN High Commission situated in Jaffna and afterwards she engaged in discussions with the civil organizations in the district and also the residents of the region.

Later she joined an observation tour of the National Vocational Training Center situated in the Kilinochchi Town.

National Freedom Front alleges that western countries are trying to achieve what Velupillai Prabakarn failed to achieve through Navi Pillai.

Media spokesmen of NFF Mohamed Mussamil addressing a media briefing held in Colombo had this to say.....