A clash between 2 election candidates in the North; a supporter injured in a shooting. 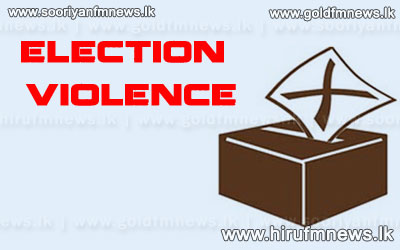 PAFFEREL has addressed a letter to the Public Administration Ministry Secretary with regarding the election.

PAFFEREL Executive Director Rohana Hettiarachchi  told our news team that the tendency to use provincial council institution officials and vehicles had increased.

The PAFFEREL executive director said that because of this he had sent a letter to the Public Administration Ministry Secretary informing him to take action to inquire about this.

Meanwhile 210 complaints with regard to incidents of election regulation violation and violence have been lodged with the election secretariat.

The complaints unit set up at the election secretariat said that 22 out of these complaints were with regard to incidents of violence.

The highest number of complaints entailing violence is reported from Kurunegala District.

The number of complaints thus lodged from the Kurunegala District is 43.

The number of complaints reported from the Puttalam District is 19.

Meanwhile, a clash occurred between two groups of UPFA supporters at Kodikaamam in Chaavakachcheri last afternoon.

The police said that a shooting also had taken place on this occasion.

The police media spokesman’s office said that this clash had taken place between two UPFA candidates.

One person was injured in the incident and admitted to the Chaavakachcheri Hospital.