A container emerges from Chilaw Sea. 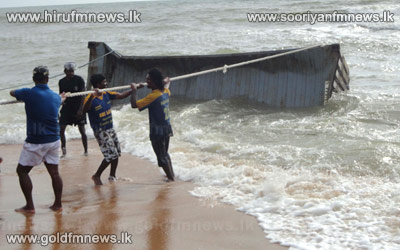 The Chilaw Police states that the container recovered from deep sea near the Chilaw – Kurupane fishing village will be opened tomorrow.

A spokesperson of the Chilaw police stated that it will be opened in the presence of the Assistant Divisional Secretary of Chilaw.

The container was towed to shore by the Navy utilizing a Dvora craft after fishermen in the region had notified the Navy regarding the submerged container.

Our regional correspondent reported that the recovered container was approximately 40 feet in length and showed signs of being submerged for an extended period of time.

Meanwhile, fishermen in the region have also found numerous items such as watches and sports equipment along the coast from Kurupane to Muthupanthiya in Chilaw.

Navy Media Spokesman Commander Kosala Warnakulasuriya stated that until the container which is currently placed on the beach near the Navy camp is opened, it is impossible to discern what it contains.

However the Navy Spokesperson stated that the container is likely one that toppled off a ship.

Both Police and Navy personnel have been currently deployed with regard to the security of the container.