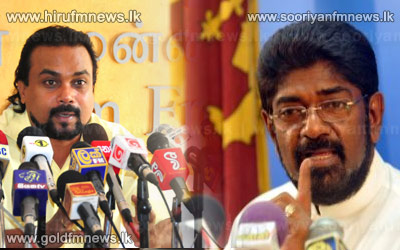 The National Freedom Front stated that the invitation to UN High Commissioner for Human Rights Navaneethan Pillay to visit the island was not a government collective decision.

However Cabinet Spokesman Minister Keheliya Rambukwella told the cabinet decisions media briefing that Pillay was even given an opportunity to go beyond the diplomatic framework in conducting her investigations during her mission in the island.

Addressing a UPFA media conference held yesterday, Minister Nimal Siripala de Silva said that the government invited the UN High Commissioner to tour the island believing that she would not come with ulterior motives.

During a media briefing held at the party office NFF Leader Minister Wimal Weerawansa said that the government would not have invited Navi Pillay to tour the island.

He expressed these views referring to a secret meeting that was allegedly held yesterday by Pillay at Trincomalee.

When a journalist asked the Minister whether the Cabinet was educated on the decision before the invitation was extended to the UN High Commissioner for Human Rights, the minister had this to say.

Minister Rambukwella further elaborated his views to our news team.