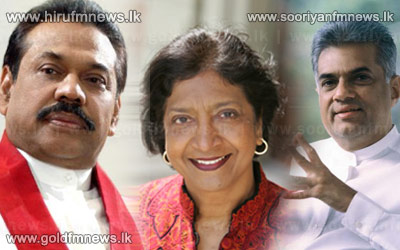 UN office in Colombo said that today the UN High Commissioner was scheduled to meet and hold discussions with UNP leaders including Opposition Leader Ranil Wickremesinghe and TNA representatives.

Meanwhile the collective of parents of those killed and gone missing is getting ready to request UN Human Rights High Commissioner Navy Pillai to inquire about all crimes committed during the war waged during a 30-year period.

Calling a media briefing in Colombo yesterday, Collective’s convener Aananda  Jayamaanna said that  the UNHR High Commissioner would be met and the relevant request handed over to her today.

Minister Keheliya Rambukwaella was queried at the media briefing on cabinet decisions yesterday with regard to the statement Minister Mervyn Silva made on 27th to the effect that he was prepared to marry UNHR High Commissioner Navaneethan Pillai.

At a function held in Maradana Minister Mervyn Silva stated as follows.

The following is the discussion that took place when media personnel queried Minister Keheliya Rambukwaella: