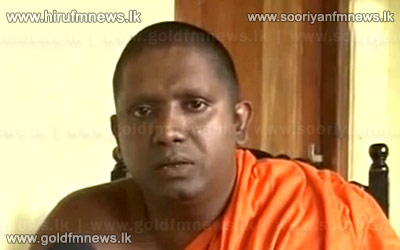 The chief incumbent of the Galoluwa Sri Sambuddha Jayanthi Vihara, Theripaha Siridhamma thero who began a fast unto death again with regard to the Weliweriya Rathupaswala water issue had decided to call off the fast.

This was following a discussion that was held between the Senior DIG in charge of the Western Province Anura Senanayaka, the management of the factory and the residents of the region.

A group including the thera handed over a letter to the UN office in Colombo upon which the thera commenced a fast last night after receiving information about attempts made to reopen the factory in concern.

The Attorney appearing on behalf of the factory had informed courts yesterday that the factory will be reopened shortly as there was no evidence to show that water reserves were contaminated as a result of factory waste.

Meanwhile, factory workers who spoke to our news team stated that they had no way of leaving the factory as residents had blocked them.

Security had been tightened in the area since last afternoon.

During today’s discussion a consensus had been reached not to recommence manufacturing at the factory until a proper verdict is received and only 85 employees could enter the factory for essential maintenance work.

Senior DIG in Charge of the Western Province Anura Senanayake stated that 15 residents can monitor these activities.

Speaking further Senior DIG in Charge of the Western Province Anura Senanayake also had this to say.