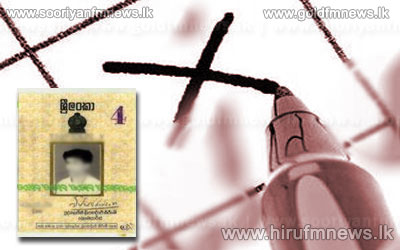 Earlier, September 9th and 10th were declared as postal voting dates for the government servants to cast their vote.

The Election Commissioner has granted 3 extra dates for government servants, if they miss the first 2 dates, the extra dates will facilitate them to caste their postal votes.

18 more days ahead of the provincial council elections, the number of election related complaints are rising daily.

The latest such incident was reported from Mahawa area where wild elephant repellent crackers were fired at the party office of UNP PC candidate Sampath Tirimanne in the wee hours of today.

Similar attack was launched on the shop of a supporter of Sarath Fonseka’s Democratic Party in the wee hours of today.

The shop owner has facilitated a Democratic Party candidate to hold a rally in Mahawa on September 1st.

Among them, 27 are incidents of violence and the highest number of incidents reported from the Kurunegala district.

Executive Director of the PAFFEREL Rohana Hettiarachchi stated that his organization has received 278 election related complaints and 35 among them are incidents of violence.

However the Police Media Spokesman office said that it has received 90 election related complaints, and acting on them, police have arrested 81 suspects.