A model from Sri lanka to the UN. 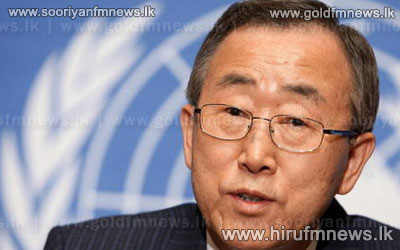 The UN has decided to consider as a model the recommendations of the report of the committee appointed for probing UN’s behavior during the final stage of the war in country .

UN General Secretary Ban Ki Moon said that it had been decided to consider the report concerned as a model with regard to UN’s action at times crises occur in other countries.

An allegation was levelled saying that the UN had not acted properly during the last stage of the war in the country.

Based on this charge, the Secretary General also appointed a committee for probing UN’s action in this country .

Baan Ki Moon had made the above statement based on the recommendations of the said committee.

The General Secretary said so while participating at the launch of the UN annual report yesterday.

Expressing his views further on the occasion the UN Secretary General said that all countries in the world should follow the human and humane rules.

The UN Secretary General also said further that all countries work together towards this.