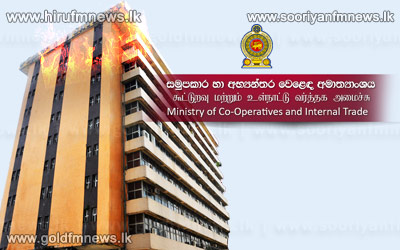 On the findings of the Government Analyst, the Colombo Crime Division has begun investigations to arrest the suspects who set fire in the CWE building.

A senior police officer told our news team that the Slave Island police will assist in this regard.

A fire broke on the 7th floor of the CWE building at Vauxhall Street Colombo in the wee hours of July 31st, making a damage of 10 million rupees.

The Slave Island police, who made the preliminary investigations, sought the Government Analyst assistance later to find the root cause of the fire.

According to the Government Analyst, the perpetrators have used some instant inflammable substance to set the fire.

A senior officer of the Colombo Crime Division told our news team that, statements will be obtained from respective parties to arrest the suspects.