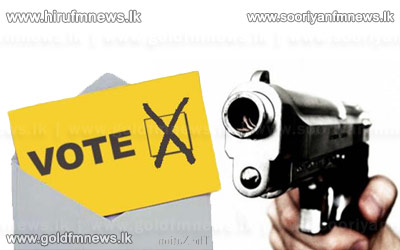 Election related violence incidents are on the increase ahead of the Provincial Council election on September 21.

Acting Police Media Spokesman SSP Ajith Rohana said that the latest incidents were a shooting at a UNP PC Candidate’s office at Yatiwa-wala in Katugastota Kandy this morning.

However nobody was hurt in the shooting incident.

SSP Ajith Rohana also said that gun shots were fired at the home of a supporter of a UPFA candidate at Lewella in Kandy yesterday night.

Police Media Spokesman had this to say about the incident.

Meanwhile an Election Secretariat spokesman said that his office has received 363 election related complaints and 39 out of them are on violent incidents and the balance is on the breach of election rules.

He also said that the highest number of election related complaints are reported from the Kurunegala district.

The PAFFEREL stated that 25 persons have been hospitalized due to election violence since the nomination date.

Meanwhile the postal voting is started today, and it will end tomorrow.

PAFFEREL Executive Director Rohana Hettiarachchi said that postal voting is being taken place smoothly and no complaint has been reported so far.