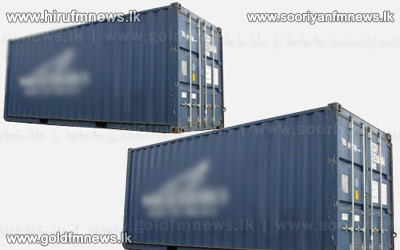 Sri Lanka Customs says that two containers brought to the country from Pakistan are kept at the Colombo harbour since it is suspected that they contain narcotics.

Customs Revenue Supervisory Task Force Director Maali Piyasena told our news team although one of these two containers had been sent to a Colombo 10 address, it had been revealed in investigations that it was a bogus address.

The Director said that two persons were arrested with regard to the other container and further querying of them was continuing.

Customs Revenue Supervisory Task Force Director Maali Piyasena said that further investigations were going on with regard to these two 20-foot containers.

Police Narcotic Bureau says that it discovered certain important information about the international drug network which brought the Asia’s largest narcotic contraband to the country recently.

A senior spokesman of the Narcotic Bureau told our news team that investigations are continuing with the assistance of the Interpol to arrest the main suspect of the racket.

Meanwhile Acting Police Media Spokesman SSP Ajith Rohana said that Sardari Khan from Pakistan, who is believed to the master minder behind the drug contraband, had visited Sri Lanka on the 8th of August.

Police investigations revealed that Sardari Khan had met the suspects who are now in police custody and had discussions with them before launching the racket.

He also said that police has already sought Interpol assistance to issue a red-notice on Sardari to arrest him.

Police Narcotic Bureau officers detected 258 kilograms of heroin concealed in a grease container brought to Colombo from Karachchi at the Customs Clearing Division at Orugodawatta on the 30th of last month.

This contraband worth of 2.5 billion rupees was believed to be the largest narcotic haul seized in the South Asian region so far.

A Pakistani national and 3 of his counterparts are already in police custody in connection with this drug racket.