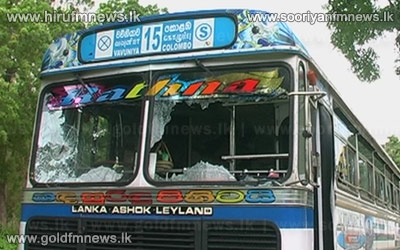 A private bus plying between Vavuniya and Colombo at Maradankadawala in Kekirawa area was attacked in the wee hours of today.

Kekirawa police said that 11 fleeing attackers by a van after the incident were arrested in Kala-wewa later.

The driver and the conductor who were injured in the attack were admitted to Kekirawa hospital.

Passengers had received only minor injuries.

The attackers, all were from Melsiripura area will be produced before the Kekirawa Magistrate later in the day.

Police said that a dispute over bus turns on the Vavuniya-Colombo and Jaffna Colombo routes had led the bus operators to the incident.

The conductor who was subject to attack described the incident to our news team.