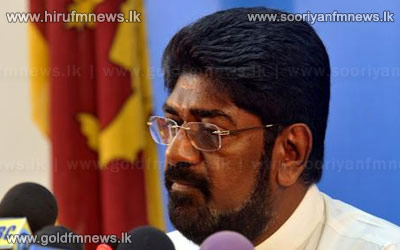 Cabinet Spokesperson Minister Keheliya Rambukwella states that a group is preparing to go to courts with regard to the election manifesto presented by the Tamil National Alliance for the Northern Provincial Council election.

Speaking at the cabinet decisions press briefing held at the Government Information Department Minister Rambukwella stated that the government expresses its regret that the TNA presented such an election manifesto.

Minister Rambukwella responded in the following manner to a question raised by a journalist who queried if the TNA wins the Northern Provincial Council election would that not be the equivalent to the public of the North accepting the TNA’s election manifesto.

Another journalist queried the minister regarding the Northern Provincial Councilor Major General G. A. Chandrasiri, who is a government official, engaging in propaganda activities for the United People’s Freedom Alliance, to which the minister responded in the following manner.

Speaking further Minister Rambukwella also stated that despite the Jathika Hela Urumaya withdrawing from the Parliamentary Select Committee appointed to solve the national issue, the activities of the PSC will continue.

The United National Party is currently making various requests for a national election.

Upon inquiry by a journalist with regard to this, the Minister Keheliya Rambukwella in response stated that a presidential election will not be held in 2014.