Inability of the Opposition to win elections is not Government s fault - President. 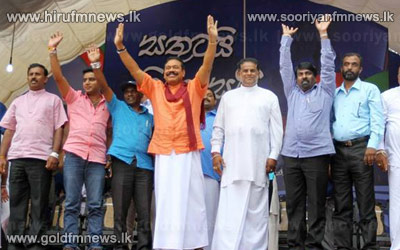 President Mahinda Rajapaksa says that the Opposition to win elections honoring democracy is not Government’s fault.

Participating at a people’s rally held yesterday at Pooduluoya in Kotmaley to ensure the victory of UPFA Nuwara Eliya District candidates, the President said that the charges that some level saying that the country was moving away from democracy were false.

Opposition Leader Ranil Wickremasinghe says that the Provincial Council election this time is the first step in the battle for toppling the Government.

The Opposition Leader said so while participating at a people’s rally held in Aanamaduwa yesterday in view of the North Western Provincial Council.