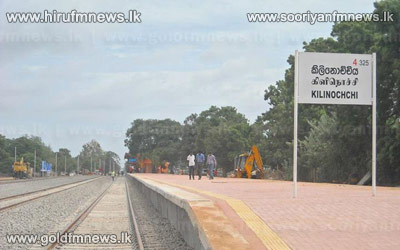 The Yal Devi train will travel from Omanthai to Kilinochchi today for the first time in 23 years.

The first time the Yal Devi train plied from Colombo to Kankasathurei was in 1956.

In 1985, approximately 100 individuals died as a result of the bomb attack carried out by the LTTE on the Yal Devi train.

Meanwhile, the Chunnakkam sub station will be commissioned for public use thereby providing electricity for the North from the South for the first time in two decades.

23 years ago the Lakshapana power plant supplied electricity to the Jaffna peninsula and due to LTTE activities the supply of electricity was terminated.

Minister of Power and Energy Pavithra Wanniarachchi stated that apart from residencies small and medium scale enterprises will be provided electricity as well.