Video: K.P. appears in a media briefing for the first time, criticizes the TNA election manifesto. 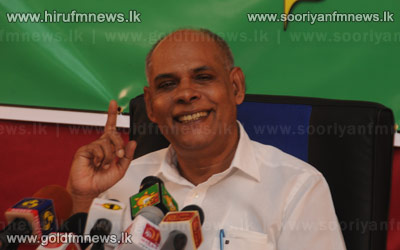 Kumaran Pathmanathan alias KP who was the head of arms procurement of the LTTE states that the opportunity given to the public of the North to vote is a golden one.

The former chief of arms procurement for the LTTE Kumaran Pathmanathan held a press conference for the first time today at the Sencholei Orphanage which was attended by numerous local and foreign journalists.

Speaking at the press conference KP stated that the way to obtain a solution for the National Issues is through a provincial council system that stems from the 13th amendment.

Speaking further during the press conference KP severely condemned the election manifesto presented by the Tamil National Alliance as well as the activities of the TNA leadership including the chief ministerial candidate C. V. Wigneshwaran.

Elaborating further KP stated that the election manifesto presented by the TNA is the same as the Wadukkodei agreement presented by the then Tamil United Liberation Front under the leadership of Appathurei Amirthalingam in 1976.

Furthermore he also stated that the election manifesto presented by the TNA is similar to the Oslo Agreement which was signed between the chief political strategist of the LTTE Anton Balansingham and the Minister of Investment Promotions and Constitutional Affairs Prof. G. L. Peiris of the then UNP government in 2002.

Meanwhile, KP also stated that the non participation of the TNA in the parliamentary select committee established to solve the national issue cannot be accepted.