Video: Randomly selected Ballot boxes will be sent for counting - Plastic ballot boxes among them. 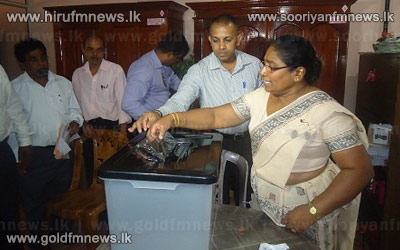 Plans have been made to adopt a new methodology to deliver ballot boxes to counting centres during the upcoming Provincial Council election.

Speaking at a press conference held in the Matale District Secretary’s office, District Secretary Helen Meegasmulla stated the elections commissioner had stated that this new methodology will be utilized in the 5 districts of the Northern Province and the Nuwara Eliya District.

She also stated that the elections commissioner had issued instructions to utilize this new methodology in one electoral administrative division each in both the North Central and Central provinces.

Accordingly ballot boxes will be randomly chosen to be sent to counting centres as opposed to adhering to the numerical method.

The department of elections has decided to use transparent ballot boxes for the first time.

A senior spokesperson of the department of elections stated that several transparent ballot boxes have been dispatched to each district as a pilot project.

Speaking further the spokesperson stated that approximately 200 ballot boxes have been sent to 10 districts.

However, speaking during the press conference held today the Matale District Secretary stated that the Matale district has received 46 transparent ballot boxes.